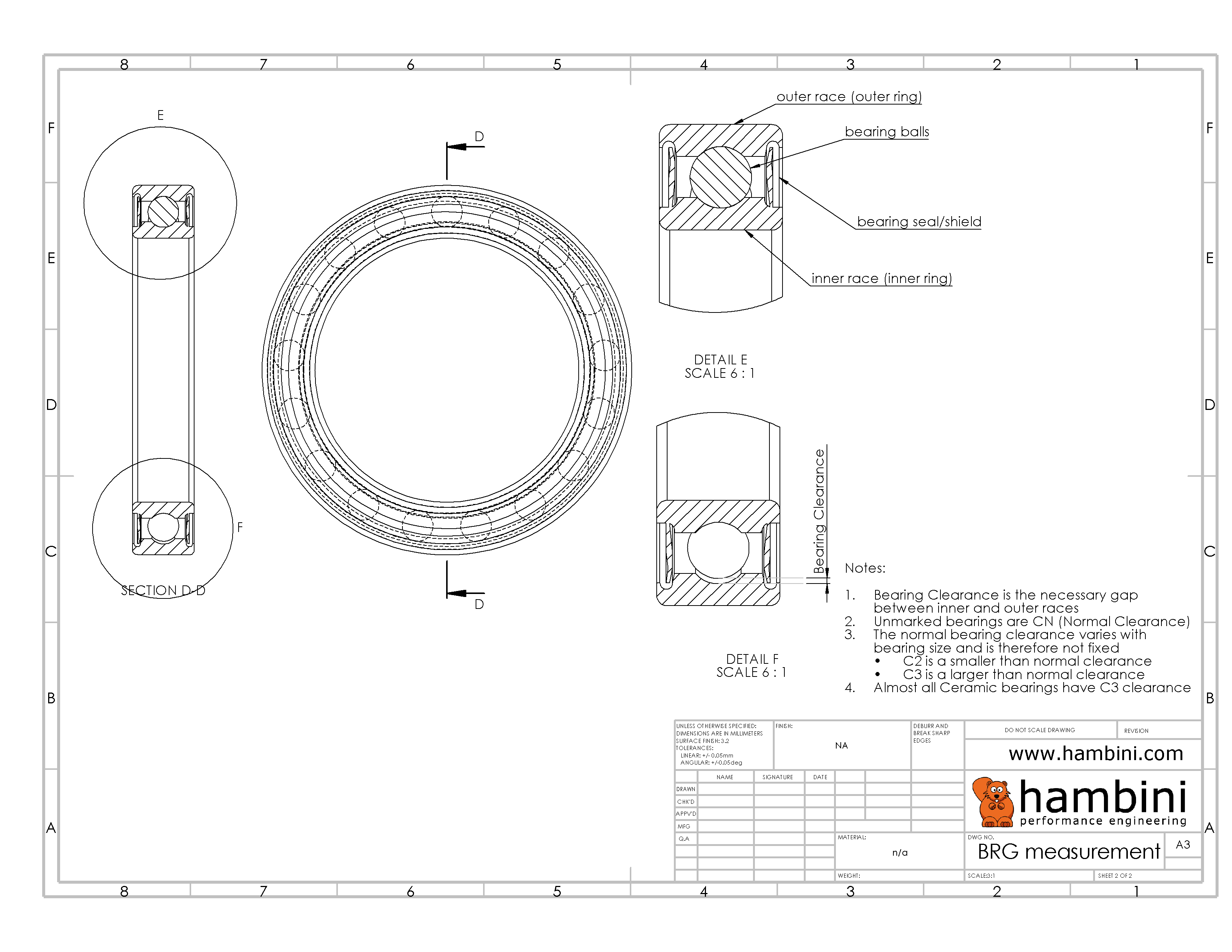 One of the most controversial topics in the cycling industry is with regards the topic of Ceramic bearings and whether they do or do not reduce friction dramatically in riding. This article will address some of the concerns and topics associated with this debate and quantify the numbers.

The bearing clearance is a measurement given to the small gap between the inner race, outer race and balls. It is required to prevent bearing seizure when it warms up and expands.

Another common difference in bearing construction is the cage type. The cage is required to keep the ball spacing even all of the way around the bearing. On steel bearings (usually by Japanese manufacturers NSK, NTN) the cage is a ribbon that is made from a piece of pressed metal and riveted between balls. This is a comparatively costly method of construction but improves friction characteristics at low speed and stiffness.

In the bicycle industry, bearings generally have non contact or fully contacting seals. This is in light of the real risk of contamination from dirt and other ingress. In theory, non contacting seal will have the same friction level as a completely open unsealed bearing, in practice this is not quite the case because the seals generate a barrier for lubricant to ride up against and this is a frictional loss. Fully contacting seals touch both the inner and outer races to maintain the seal. This is definite frictional loss and they will always appear to be draggy when rotated in the hand. At operating speeds this loss from friction is still there but not so noticeable.

Basic bearing seal technology has not changed dramatically since the sixties and is largely governed by manufacturing costs rather than performance. Over time, the main improvements have come from sealing materials rather than geometrical differences.

Bearing production in volumes is an almost entirely automated process and was pioneered by the Japanese. The big four (SKF, NTN, NSK and FAG) produce thousands of bearings every second with little human intervention. The bearings are usually made on one site from raw material to boxed finished product. These bearings are almost always steel.

In contrast, the smaller ceramic suppliers (Enduro, Kogel, Ceramicspeed) have much more human intervention and often complete assembly of bearings by hand. The smaller companies do not have the ability to carry out the entire manufacturing process on site and typically subcontract the manufacturer of one or more parts of the bearing to a third party and then complete the final assembly in house.

Some suppliers of ceramic bearings buy in a generic hybrid assembly and laser etch their own brand name onto the side of the bearing. These bearings are purchased at very low sums ($5/£5/€5) from the far east and then sold on for 10 or even 20 times the price to consumers in the US and Europe. It’s easy to spot these manufacturers as they are usually sold by one supplier only and lack technical data.

The large manufacturers have lots of people working specifically in their engineering departments whom end users can consult for technical advice.SKF, NTN, NSK and Schaeffler (FAG/INA) provided the graphs shown below which show the proportion of frictional loss for each component of a bearing.

Whilst the proportion of friction associated to each component of a bearing varies slightly, the overall values and order are the same. The bearing seal is the biggest loss, followed by the lubricant. The rolling friction is extremely small.

Schaeffler’s data is useful because it shows how small the potential gain by switching from steel to ceramic bearings is. The maximum improvement is a potential 3%. In practice, rolling friction cannot be eliminated so the likely figure is more like 10% of the 3% ie 0.3%.

To illustrate this practically, a small experiment was carried out to neutralize the effects of grease and seals. Two bearings, an Enduro ceramic and an NTN LLB (Non Contact) steel bearing had their power loss measured at different stages of disassembly. The graph below shows the process

An often neglected part of tribology is how a bearing responds as it wears out. The graph below shows a comparison between two steel bearings (SKF and NTN) and a Ceramic bearing (Enduro). Initially the Enduro bearing has lower friction, at around 600km of use, the ceramic bearing has worn a track into the comparatively soft steel races and the bearing friction starts to increase dramatically. It is comfortably higher than steel bearings after a modest running in period. Hybrid ceramic bearings are the equivalent of trying to run a locomotive on an asphalt road – the hardness differential causes the road (raceway) to become damaged.

The graph below shows how much power could be saved over 1000km between different bearing brands and their seal types. NTN, NSK and SKF dominate this chart and that is largely due to efficient seals and metal cages. The ceramic bearings which are coloured in red are not quite as efficient over a prolonged distance. If the evaluation window was extended to 10,000km, the ceramic bearings would perform much worse as a more significant track would have worn into the bearing races thereby increasing friction.

17 thoughts on “Ceramic Bearings vs Steel Bearings: An Engineering Analysis”

Please note there are some severe delays in international postal services (Australia, USA). If you need an item in a hurry, Expedited shipping is recommended Dismiss