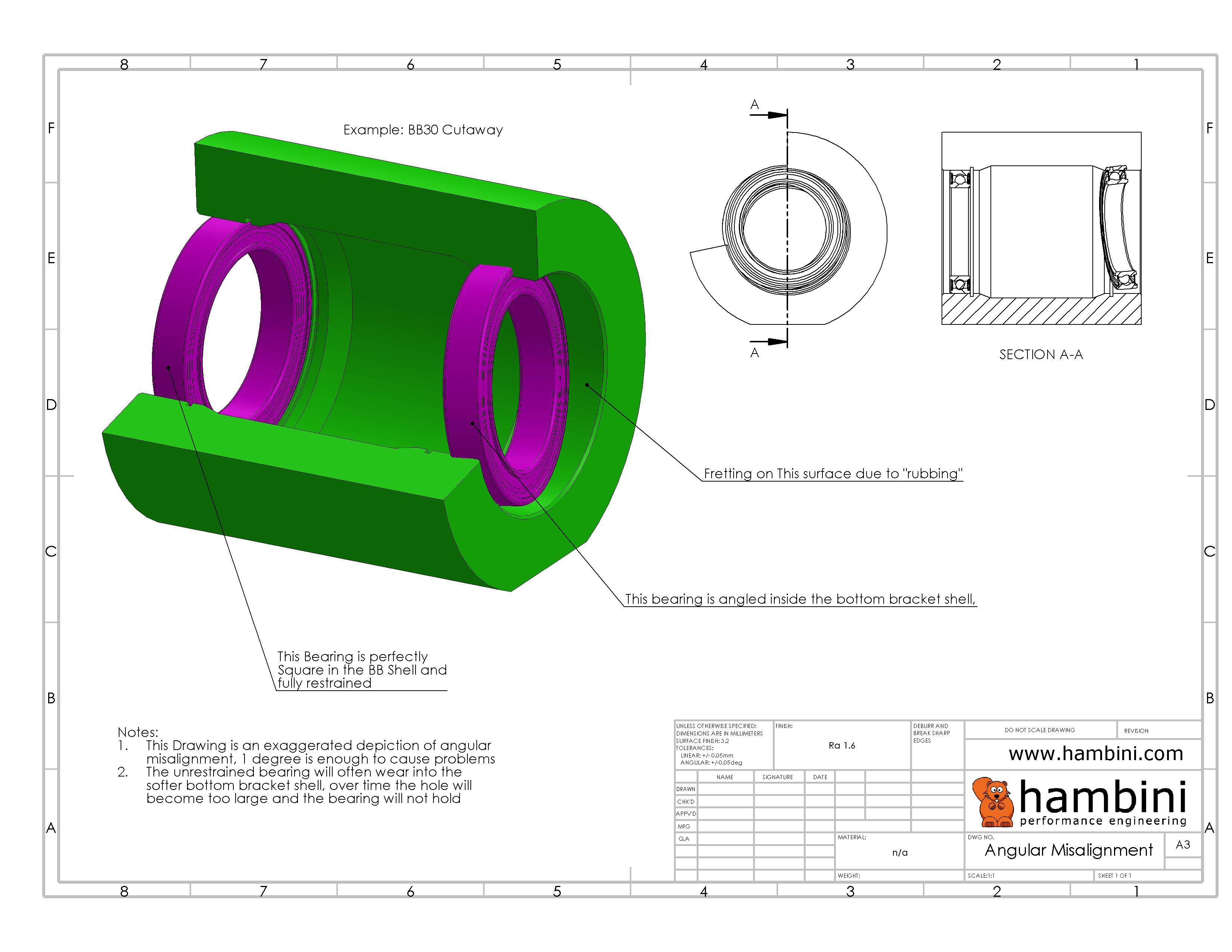 If you are reading this you will have probably already come across the numerous posts by various individuals in Internet forums across the web.

General guidance varies from taking everything out and regreasing it to installing with extreme measures such as epoxy resin.

The reality is pressfit has nothing to do with creaking. There are many areas of a bike where bearings have a pressfit and there are no problems. For example, wheels, freehubs, pulley wheels and some headsets are pressfit yet they don’t generally creak.

The basic reason for the creaking is one of two reasons, either a poor fit or misalignment. Often, the two occur at the same time. Modern bicycle frames are now readily available in lightweight materials and more specifically made of carbon. The manufacturing techniques associated with composite structures produce frames which have multiple parts that have been glued (manufacturers will say bonded) together. Bottom brackets are commonly glued together in two halves. A lack of suitable alignment dowels means these parts have a high tendency to be misaligned.

Once a misalignment in a bottom bracket is evident, the hardened bearing surfaces wear the bottom bracket down and the shell becomes a slack fit and thereby causing creak.

The drawing below shows parallel misalignment

The drawing below shows angular misalignment

Another route to bottom bracket problems is through issues in the carbon fibre manufacturing process. Carbon is placed into moulds and with pressure and heat, it is cured to produce rigid carbon fibre frames. Unless carefully controlled, this process can produce wildly varying dimensional fits. Practically, the frame manufacturer must allow for expansion and contraction to occur through the autoclave and make allowances for this.

If the expansion and contraction effects are ignored or miscalculated which is a common occurrence, the bike frame could end up with a fit that is too slack and once again a creaking problem may occur.

As a lot of manufacturers sub contract this manufacturing out to companies in China and Taiwan, they are at the mercy of the sub contractors quality control.

The Video below, talks through some of the issues with creak

Look and Time have very good manufacturing tolerances, their frames are unlikely to creak. These two companies control their manufacturing in their own factories and this is reflected by very good dimensional stability.

Conversely, of the large manufacturers, Cannondale and Boardman bikes have poor manufacturing tolerances and this is affirmed through numerous posts in multiple bike forums with lots of users reporting bottom bracket problems.

The worst performer in this chart is Filament Bikes. A boutique bike brand run by one individual called Richard Craddock. His bottom brackets are usually much slacker than they should be due to his inability to use accurate measuring equipment and understand the limitations of it. As a result of this, I do not warranty any Hambini bottom bracket in a Filament frame.

6 thoughts on “Bottom Bracket Pressfit and Creaking, an Engineering Analysis”

Please note there are some severe delays in international postal services (Australia, USA). If you need an item in a hurry, Expedited shipping is recommended Dismiss